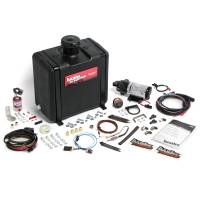 Adds a second stage for increased output and control;Display EGT or Boost;Connects to your factory MAP sensor;Includes 7 Gallon Tank Kit